Days of Future Past

by Mike and Matt Blohm

This trip report covers a visit by my sons and myself to the StarFest 2022 event in Denver, Colorado, on May 13 – 15, 2022. StarFest is a combination of multiple “fests” all under one roof. The 2022 version had ten different fests involved. Unfortunately, after 45 total years, the event is no longer going to occur, and this was the last one. That was an additional incentive to attend this year. Here is a quote from their website: “The Final Voyage. StarFest 2022 is the final convention. This is the last voyage for StarFest Denver. It’s been our 45-year mission: To bring science fiction fans together, To seek out guests and exciting programming, To boldly go—where no convention has gone before.” The event was held at the Hyatt Regency Denver Tech Center hotel, and was spread over the ground and second floors (main auditorium, conference rooms, and classrooms) and up on the 12th floor as well.

We attended the Saturday, May 14, session. Our primary interests were ScienceFest (Real Space topics), ModelFest that was being sponsored by the CoMMiES from IPMS Region 10, ComicFest, ArtFest, catching any guest actor presentations, and of course all the vendor rooms. StarFest had a consolidated schedule sheet presenting everything that was going on, and you had to plan out your day and figure out where you needed to go for each event you wanted to see. Quite daunting. Lots of attendees were in costume, and some were really well done. Pictures of some of those folks are included below. The other fests included KlingonFest, HorrorFest, GameFest, Cosplay, and Avistrum (sorcery).

We were able to listen to the “science” presentations on the “Hubble Space Telescope—32 Years of Observing the Universe” by Dr. Kenneth Carpenter; and the “Apollo 11 Moon Landing Experience” by Richard Blake that did cover the other US manned space programs as well. Learned some new facts from those. There were guest actor presentations by Brent Spiner (“Data” from Star Trek: The Next Generation), Terry Farrell (“Jadzia Dax” from Deep Space 9), Michelle Hurd (“Raffi Musiker” from the Star Trek: Picard series), Eddie McClintock (agent Pete Lattimer on Warehouse 13), and Nick Creegan (“Marquis Jet” (Joker) in DC’s Batwoman). Matt talked to and got an autograph from Terry Farrell. Unfortunately, most of the biggies were on Sunday, which we did not attend.

ModelFest was really hopping. They had a ton of models on the tables and lots of people checking them out. I did not bring any models to enter this year, as we would only be there on Saturday. I have included a lot of pics of the models. The big model turnout may have been because this was the last show. There are way too many to list—mine and Matt’s favorites included: the “Starship Making a Gate Jump” that had lightning bolt lighting effects, Colonial Marines ship USS Sulaco and Nostromo (Alien), Borg Picard and Grogu flying a Star Trek-ish Pod Racer, Nautilus submarine (Nemo), Ragnarok Interceptor, Space Shuttle 1959. INSS MacArthur (The Mote in God’s Eye book) King Kong Versus T Rex, VE-1 ELINT Seeker (Macross), Buck Rogers Thunder Fighter, Millenium Falcon, Advanced Research Colonizer, a custom Gundam build, a bust of Neytiri (Avatar), Wrath of Kings Wolves figures, SS Botany Bay (Star Trek), and the USS Enterprise in an orbiting Space Dock, and a new Enterprise-ish star ship design in an Asteroid Space Dock (two different models).

I talked with space and science fiction artist Richard Sternbach for quite a while about his build of a Lunar Lander model, which is shown is the included pictures. He worked special effects for the Star Trek movies and TV series, and designed the Voyager and Deep Space 9 spacecraft. He was at the StarFest event supporting ModelFest and gave a decal-making clinic on Saturday.

Lots of stuff was available in the Vendors rooms. There was one dealer who had a lot of sci-fi and fantasy type modelers. Matt got some Gundams and I got a Macross fighter jet. I tried to find a new crystal ball at “Honest Harry’s” whose slogan was “Used Weapons, Widgets and What Not. Rayguns for All the Family,” but they did not have the kind I needed. Lots of cool shirts, posters, Lego figures, and other doo-dads. The T-shirts covered lots of movies and TV shows, and you could probably find one that had your favorite scene or character. I was very tempted by the Killer Rabbit of Caerbannog, but did not get one, even though I do have a Holy Hand Grenade of Antioch at home.

On the way out we checked out a bunch of vehicles at the hotel entrance. Of note was a Jurassic Park Maintenance Truck with a couple of dinosaurs hanging out of it. Since this was the last StarFest event, they had banners from all the previous fests hanging about the area. Some very cool designs. Pictures of some of those are included, with a selection of T-Shirts with past StarFest logos. It is a shame that StarFest is no longer going to take place. We really enjoyed the several that we did attend. 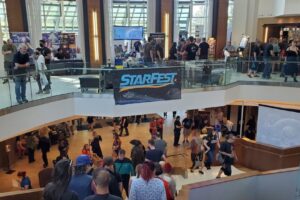 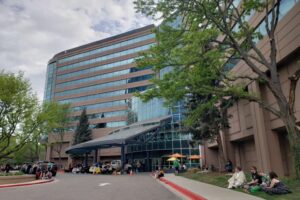 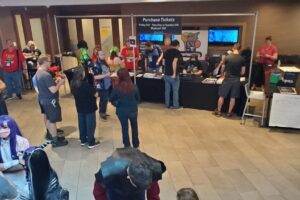 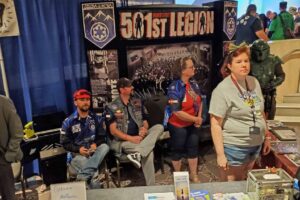 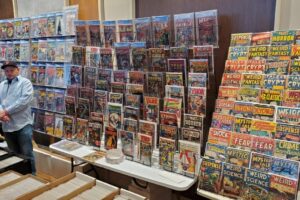 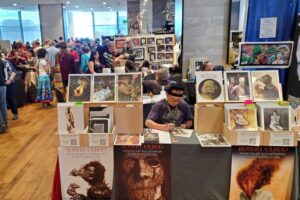 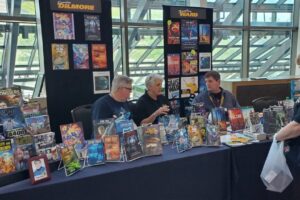 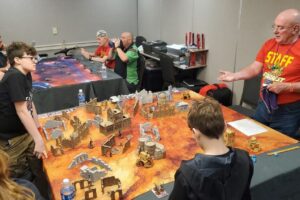 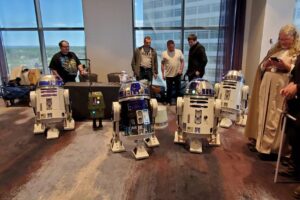 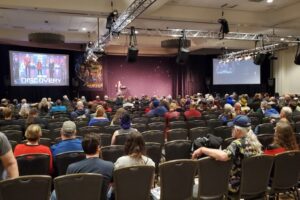