This article covers American ace Neel E. Kearby, who flew the Republic P-47D “Thunderbolt” in the Southwest Pacific (SWP) Theater of Operations, and the build of his “Jug” in 1⁄72 scale. I have not written one of these “aces articles” since I was the ASM President back in 2018, and my plan is to try to continue to do a monthly installment for the ASM Newsletter and the ASM Website.

Colonel Neel Kearby is the 13th-ranking (tie) American ace, 9th-ranking (tie) USAF ace, and the top ace of the 348th Fighter Group (FG). He scored 22 confirmed victories and had three probable victories and was the highest scoring P-47 ace in the SWP. Kearby took the 348th FG (“Kearby’s Thunderbolts”) into combat in the SWP determined to show that the heavy P-47 could hold its own against the more nimble Japanese fighters. Kearby was a great combat leader and his theories were proven correct. The 348th used the Jug’s diving advantage to attack from high altitude in slashing attacks and to then zoom back to height ready for another high speed pass. Kearby scored his victories in bunches. He scored four “doubles” and a “triple” on 3 Dec 1943 (3 Zekes). His biggest day was on 11 Oct 1943, when he scored six victories (2 Zekes, 2 Tonys and 2 Haps) near Boram, New Guinea. This feat earned him the Congressional Medal of Honor. Kearby was killed in action on 5 Mar 1944 in a dogfight over Annanberg, New Guinea. A P-47D Razorback is on display at the National Museum of the US Air Force painted in the scheme of Kearby’s “Fiery Ginger IV.” The vertical tail fin of Kearby’s actual “Fiery Ginger IV” is displayed next to this aircraft. It was recovered from the crash site in the 1990s and came to the museum in 2004. Seeing these two displayed together when I visited the museum in May 2008 was a very moving experience. 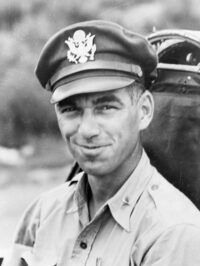 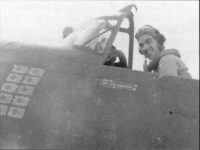 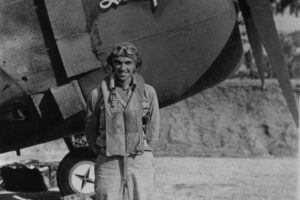 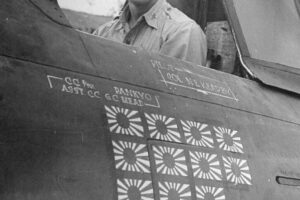 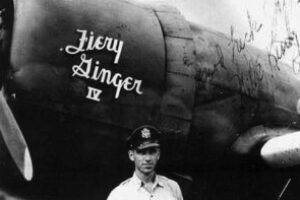 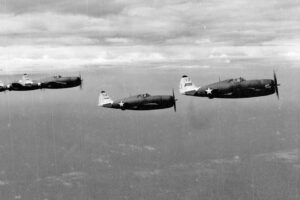 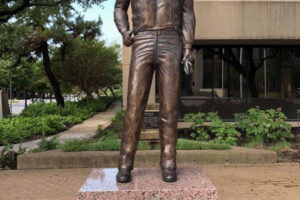 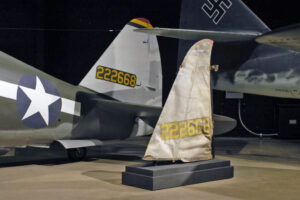 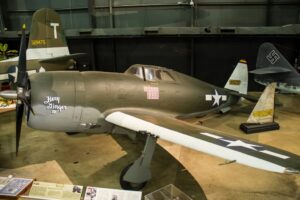 The model build of Kearby’s first P-47D named “Fiery Ginger” is depicted in October 1943 when based at Port Moresby, New Guinea, while he was the commander of the 348th FG. It displays ten victory markings at this time. “Fiery Ginger” was named after Kearby’s wife Virginia. The build used the Hasegawa P-47D Razorback kit in 1⁄72 scale. The kit went together very well but it has a sparsely detailed cockpit and no wheel well details. Decals were used for the instrument panel and seatbelts. The kit was painted in Model Master Faded Olive Drab on the upper surfaces and Model Master Neutral Gray for the lower surfaces. The aircraft is painted in the standard SWP recognition markings of a white tail and white wing leading edges. There were no blue surrounds yet for the white bars of the “stars and bars” markings in October 1943. Pastel chalks were used for the weathering and gun smoke streaking. AeroMaster decal sheet 72-008 Pacific P-47 Thunderbolts was used for Kearby’s scheme. This build occurred in 1997 for the USAF Academy Aces Gallery Model Display. More detailed 1⁄72-scale Thunderbolt kits have come out since then, in particular the Tamiya Razorback and Bubble-Top, but the Hasegawa kit holds up well. Pictures of Kearby and his P-47s and of the model are include with this article.

Decals for Kearby’s scheme can be found on:

A Look Back at the Cold War: Building a T-72 From Scratch

I originally built this T-72 back in 1983, at the height of the Cold War. It is scratchbuilt/kitbashed, using the then-brand-new Tamiya T-62 kit as a base. There were basically no good references to go by at the time; the best reference I had was the book “Soviet Tanks Today” by Steve Zaloga, published in 1983.

All of its photos are black and white. Essentially everything you see on this model is rebuilt, scratchbuilt, or taken from something else, the only original parts left from the T-62 are the drive sprockets and the rear fuel drums. With very little references to go by, I had to “guesstimate” a lot of it.

Both the turret and hull had to be re-done. The road wheels were built using wheels from several 1/25 Jeep CJ kits, the support arms are from a Tamiya M60A1, the support rollers are from a Heller AMX-13. All of the stowage boxes on the turret and hull fenders are made from sheet styrene, as are the fuel tanks. The entire front of the hull had to be rebuilt from plastic sheet, and the front “V” splash guard and the frame for the engine air intake are Plastruct angle iron strips. The turret had to be chopped up and reshaped using lots of styrene and putty. The gunner’s sight and hatch are both scratchbuilt; the TC’s hatch and machine gun were converted using the kit parts.

The oldest photos I have of finished model are from 1992, at which time it was nine years old. In one photo I compare it to a then-new AMT/MPC/ERTL T-74 kit I had just finished; I think the scratchbuilt one is better.

In 2021, I decided to revisit this old build, and fix it up a little bit. It had gotten some damage over the years – hey, its nearly forty years old, and I wanted to correct a few things I never got to doing before. Some of the road wheels had broken, and an idler wheel. In this photo of a broken road wheel, you can still see some of the chrome from the Jeep kit it came from.

I also had to repair the fuel drums and the rear of the hull. The oil tank and engine exhaust were broken off, so I replaced them with parts from the AMT/ERTL kit. While working on those, I decided to do a few upgrades. The first two were things I had planned to do all along, but never did.

The machine gun was modified from the Tamiya DsHK. I was going to cut off the feed mechanism from the top of it, and never did. I snipped that off and sanded it down. Then I added the small triangles at the front fenders. They are just styrene sheet. I also used a pair of nippers to cut out the sides of the original Tamiya tracks, to better replicate the RMSH tracks from the T-72. All of this took less than ten minutes, but it took me almost forty years to get around to it. No excuse for it really, just lazy.

I never liked my original engine fan cover; the glue had soaked thru the screen. I pried it off with a screwdriver and replaced it with one from the AMT kit. I also added a bit of photoetch to the engine deck, and a leftover hinge for the engine cover. I had a scraper blade left over from a Dragon kit, so I added it to the front.

One of the tie-down loops had broken off the turret, so I replaced that, and added a bit of photoetch to the top of the sight. Also, one of my headlight guards lost a couple of pieces; I replaced them with copper wire. While working on the lights, I added some new lenses from SKP.

I did not want to do too much in the way of upgrades to it; I wanted to keep it pretty much as I originally built in back in the day, and there is simply no way I could bring it up to modern standards. But then I don’t have to, there are plenty of better kits available now, I even have some of them. So at that point I touched up the paint and called it done. Comparing the finished tank to more modern kits like my Dragon M-84 or the Amusing Hobby T-72M1 I found that it does hold up pretty well, especially considering the lack of resources I had. The dimensions are a bit off, but not bad. The shape and layout of the back of the turret and the rear of the engine deck are wrong, but I could not make out the correct details with the photos I had.

One thing I did notice on mine, because it was based on the Tamiya T-62 kit, the turret is too far forward. I had no way of knowing that at the time. Here the hulls are lined up (first picture); and here are the turrets/guns lined-up (second picture).

A small difference, but it is there. Otherwise, it is pretty close. All in all, I am quite happy with how it came out, especially for when I built it!

Waco CG-4 Glider Build for the Cavalcade of Wings

The Cavalcade of Wings display at the Albuquerque airport had a model that was disintegrating. It was a Waco CG-4A that was used for training in New Mexico during World War Two. Fort Sumner was one of six NM glider fields and it was the hub of advanced instruction. The current Fort Sumner airfield is the old glider field. The current airfield at Tucumcari is also an old glider field. There were others. If you look on Google Earth 15 miles ENE from Clovis you’ll find the ghostly remains of field #5 in the middle of a wind farm, with a cattle tank in the middle of it. There were others. Cutter-Carr was the civilian contractor supplying instructors, a familiar name.

Fort Sumner matchbook cover, front and back from the war.

As you can see, the fuselage, which is made from some solid black cast material, disintegrated, as if it had taken a direct hit!   This was not due to physical mistreatment but internal stresses finally tearing it apart.  Usually I can salvage/repair models for the Cavalcade of Wings, but I decided to just start over.  I don’t know how old this original was but it has raised lettering on the under surface of a wing, so it was an old kit.  Fortunately Italeri made one in 1/72, a 1975 mold, and I snagged one on eBay.  It has a rudimentary interior (seats along the wall) and a basic cockpit.  Since this is for a museum, and most patrons would likely not understand why the glider’s nose was “broken,” I built it with the swing-up cockpit down so there was little reason to doll-up the interior.  You could drive a Jeep into one of these!  I would have done more with the cockpit had I realized how visible it is with the greenhouse windshield – painted with Future!

The actual build was simple right out of the box.  While the Wacos we see in the D-Day movies have the invasion recognition stripes, the trainers did not have them (preserving my stash of black and white trim film).  I resisted filling the wing-fuselage join since these had a big gap.  They were kit planes with removable wings.

The Italeri decals disintegrated on contact with water, so I had to use some stars from my stash.  Since the stars on the demolished models were the early ones without the “paddles,” I removed the paddles with a little surgery.  They are not quite right, since the tips of the stars should go all the way to the edge, but since the viewers will be feet away, and unaware of this detail, good enough.  Apparently, some trainers didn’t have numbers or they were painted out, so I didn’t worry over the disintegrated tail numbers.  Here’s a photo of a training wreck with numbers painted over.  You can barely see the old numbers under the paint.

One final thing about these gliders is that while there are landing gear, there are also skids for when the wheels tear off in the soft soil of the farmer’s fields in Normandy.

So, here’s the final product.  You can see the skids under the cockpit.  See what I mean about the visibility through the greenhouse windshield?  Oh, and there’s a window in the top of the fuselage as well as small portholes in the side.

I invite all of you to build for the Cavalcade of Wings.  Museum builds get far more “views” than they do on your own shelf.