The IPMS History of ASM

Albuquerque Scale Modelers (ASM) has been around a long time; from past conversations with club old timers, its origins date back to the late 1960s.  I could not pin down an exact year when the club formed but it was not an IPMS group- that came much later.  The early club met at different locations in Albuquerque; a long-vanished hobby shop in the North Valley and a local bank conference room were among early meeting locations.

Since there are no club records of those early days, I tried to locate more information on club history from IPMS publications; this is what I found.

The first time our club made it into print in an IPMS publication was in a “Chapter Happenings” column by Steve Kumamoto, then IPMS Director of Local Chapters (DLC), in a November/December 1983 issue of the IPMS Update:

“Albuquerque Scale Modelers Club (Albuquerque, NM) – This is one of the latest clubs to receive their IPMS charter.  Congratulations!  I would like to welcome you to the growing list of IPMS-chartered clubs in Region VI (which then included Texas, Oklahoma, Colorado, New Mexico, Louisiana and Arkansas).  At the June meeting, a guest speaker gave a talk on the various rockets and satellites launched from Vandenberg AFB in the late 60’s and early 70’s.  In July, they hope to feature a sci-fi contest and IPMS audio/visual presentation on the basics of scratchbuilding.”

Our club was listed sporadically after that, with Jack Garriss designated the IPMS point-of-contact for “ASMC” in the July/August 1984 issue of the Update.  About 1985, Region X was expanded to include all of the Mountain West, and in the November/December 1985 issue of the Update, DLC Bob Dye listed “IPMS Albuquerque” as the tail-end chapter in the region, No. 14 of 14; here’s a then-current map pinpointing IPMS chapters and regions across the country. 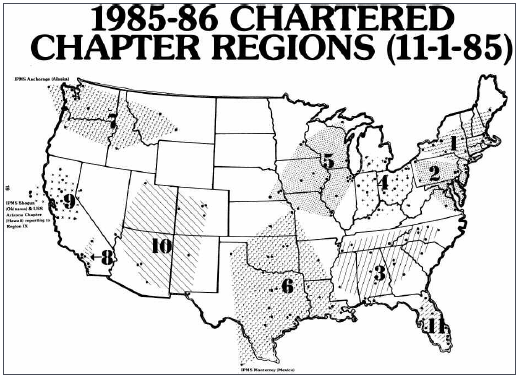 In August 1988, an IPMS Journal column, “Regional Ramblin’s,” by DLC Bill Devins, reported the following:  “IPMS Albuquerque, Albuquerque, NM- the chapter has successfully concluded a membership drive.  Some 60 new members were added to the rolls.  Perhaps they’d like to share the secret with the rest of us through the pages of the Journal.”  Looks like even then, ASM (or “IPMS Albuquerque”) was a big club!  Larry Cobb had been the listed IPMS point-of-contact for the club since 1985; longtime ASM member Larry Horyna informed me that Larry Cobb was also a former ASM president, prior to ASM president Pat Trittle’s term, in the 1980s.

A “Regional Ramblin’s” column from September 1989 mentioned that a Region X contest was being planned for the following June in Albuquerque, with further details to be provided.  Sure enough, in the April 1990 IPMS Journal, mention was made of a Region X Regional contest to be held on June 15/16, 1990, hosted by IPMS Albuquerque, at the Howard Johnson Plaza Hotel; point-of-contact was Don Alberts.  In the July 1990 IPMS Journal, Jack Garriss was mentioned again as the IPMS point-of-contact for our club.  IPMS Albuquerque continued on as a chartered chapter, with a mention in the November 1993 IPMS Journal that the club was meeting the last Friday of the month at Cutter Flying Service in Albuquerque.

ASM’s involvement with IPMS eventually led to what can be regarded as a high point in the club’s history- hosting the successful 1995 IPMS Nationals in Albuquerque, NM.  Below are some IPMS Journal ads for that event: 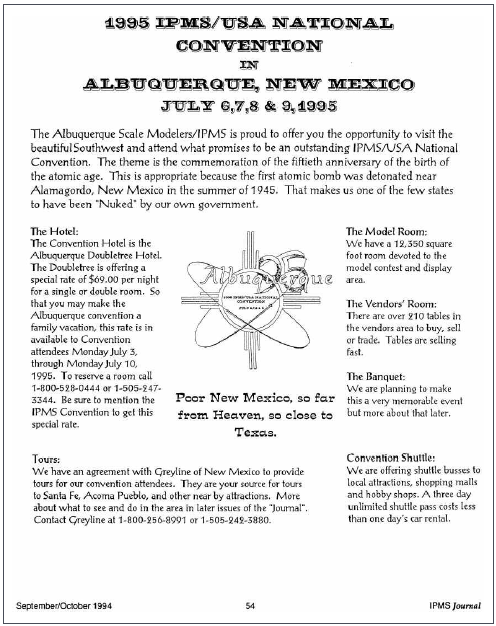 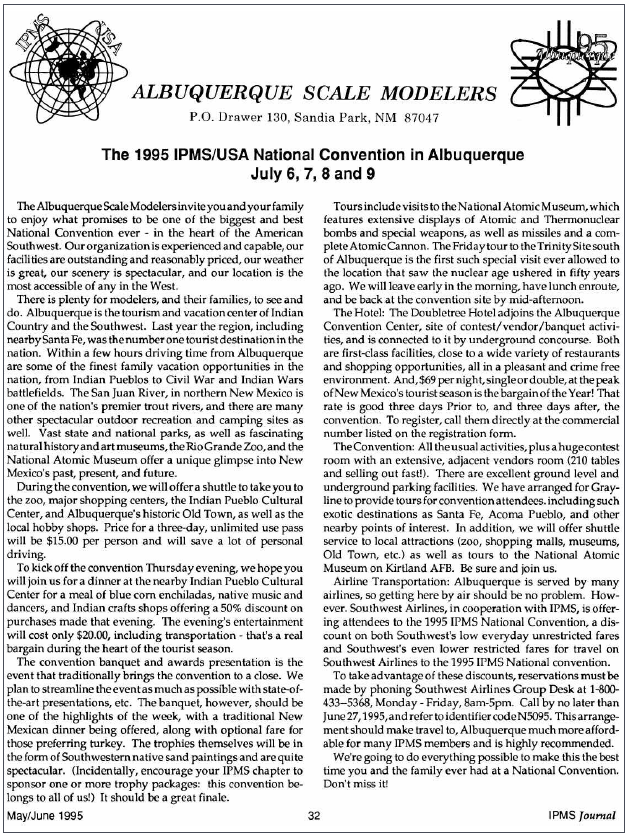 It is remarkable the club was able to bid and run an IPMS Nationals with only one IPMS Regional contest under its belt.  This is really a testament to the talent and ability of ASM members at the time who organized and staffed a national contest.

Since 1995, ASM has not been idle, putting on a regional contest at the Wyndham Garden hotel in June 2001 followed by four popular Chile Con regional shows from 2006 to 2017.  Today, ASM is one of the premier IPMS chapters in Region X, with a large membership and several Chapter of the Year awards to our credit.  We have weathered club politics, budget shortfalls and a pandemic that came close to wrecking us for good, but ASM pulled through every time and there is every chance the club’s best days are still ahead.